skip to main | skip to sidebar

Basil's friend Chewbacca has Cushing's disease and after numerous med trials his hair is growing back! Yay for hair! Keep it coming Chewie!
Posted by Anita at 8:43 PM 1 comment:

It's a sad day

Basil's friend Jake is now in dog heaven as of last Sunday. He was having some heart problems and shoulder problems. His humans thought it was best that he be relieved of the pain he was suffering. It's been hard on Jake's human boy. It made him sad when he saw Basil. We hope Jake is happy in doggie heaven and that his humans will heal and be able to love another dog again some day.
Posted by Anita at 8:38 PM No comments: 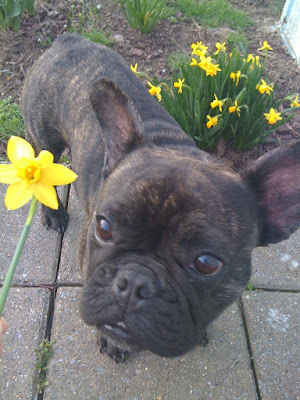 How cute is this photo? I have to make a 2011 calendar and use this for April. 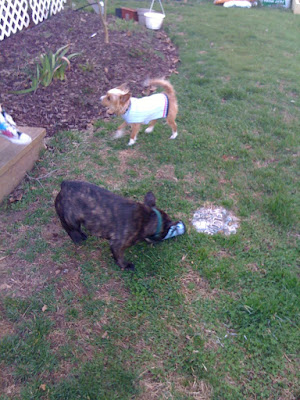 Basil had another plate date with Spartan. They were having loads of fun. 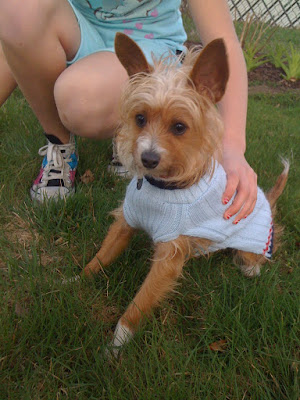 Look how handsome he is. 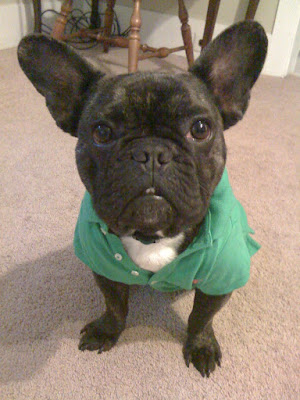 I bought Basil a polo shirt from Ralph Lauren while I was in Las Vegas. It fits perfect! He looks so handsome.
Posted by Anita at 8:32 PM 1 comment:

Basil is the smartest dog in the whole wide world! (At least in my eyes)

Today we were playing with his toy (that FBRN foster mom Joan gave him). He really loves this toy and it's the only thing that's held up in all these months. Every other toy (including his nylabones) we've been tossing out every so often.

I throw this toy and he fetches it and brings it back to me. We play tug of war and I throw it again and he retrieves it again. We went outside with it and did it outside. He got distracted and left it on the deck while he went to go sniff around in the yard. When it was time to go inside the house, I told him "Basil, go get your toy". He got it but then dropped it again before going into the house. I asked him again, "Basil, go get your toy and bring it inside". I think he knows the word "inside". He went back out, picked up his toy and brought it back inside and dropped it on the floor inside. 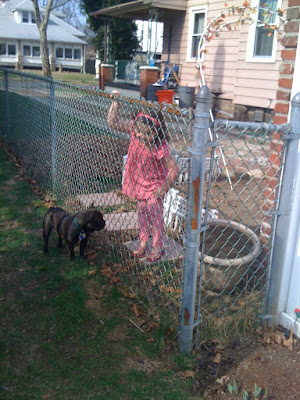 Basil loves these two little girls next door.
Posted by Anita at 8:42 PM No comments: 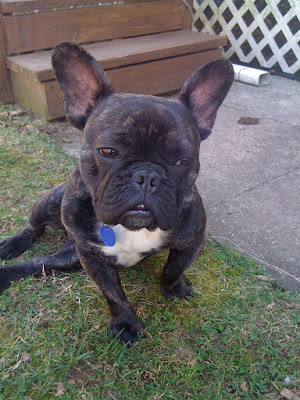 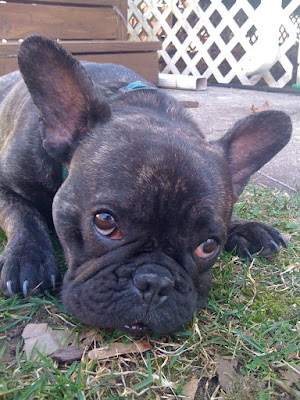 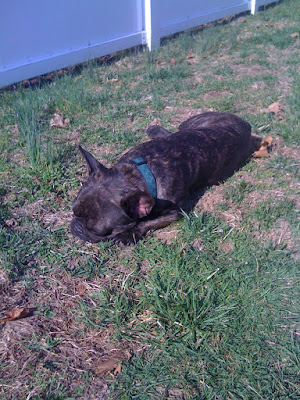 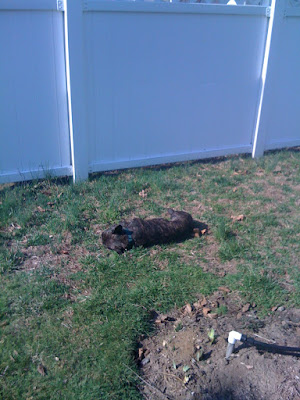 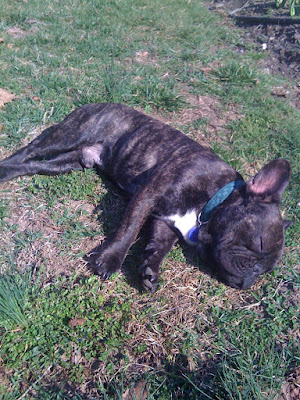 How do you turn down food?

We stayed over with my mom last weekend and as much as she dislikes animals she seems to like Basil. He's so darn cute, right?! Well she gave him a piece of grapefruit and rice when I specifically told her not to feed him anything but what I brought. I was furious. FURIOUS I tell you! He can't have citrus fruit I told her! And he's (possibly) allergic to rice. He's fine but he gased us all night.

A repair man came by and gave Basil one of those fake bacon strips. In the commercial on tv, the dog is crazy over this bacon and keeps repeating in a frenzy Bacon bacon!! BACON!!! Dogs shouldn't be that way with their food. Again, I wasn't there for it. I was soooooo frustrated! Of all the things to give him! I'd rather he eat table food! At least I know the table food is some kind of meat or something.

How do you get people to understand they can't feed your dog!?? I think I'm going to start telling people he's ferocious so don't give him food.
Posted by Anita at 8:43 PM 2 comments: 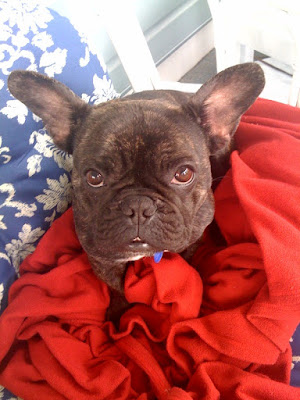 We've noticed some physical changes with Basil. His face has really rounded out and matured. His shoulders and chest have really bulked up into that bully figure. Since he's nearing the 2 year mark we should start to feed him a tiny more. I weighed him and he weighed 23 lbs so he's lost a little. So that confirms that we should be feeding him more to keep it around 25 lbs. He gets fish and fruit regularly. He is even stronger now in our opinion. When we play he pushes harder and he feels heavier. He jumps and runs through the house like a bull. He's had no accidents in the house! What a good boy! He's been itchy free with NO HOT SPOTS! Not a single one! That could change with the weather so we'll see.

We still love him and he still loves us.
Posted by Anita at 3:57 PM No comments:

Basil made some new friends this week. Spring gave us a little taste which brought all the neighborhood doggies out. I think everyone was happy to be able to go out and take in that mild spring air. 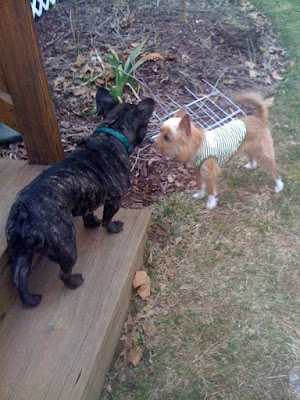 Spartan is a wittle long hair chihuahua that lives across the street. He's also daddy to Lily and Daisy (no picture). In the past, Spartan has been very protective and active, but with his new family he's been very well behaved and socialized. This was their first meeting and they seemed to get along really well. They played without all that nipping stuff. They egged one another on and chased each other. We're glad to find some regular dog friends for Basil who aren't always trying to dominate or be aggressive.

I went to Las Vegas last weekend and it was the longest time I have ever been apart from Basil. Keith said that Basil slept in my spot on the bed every night. I talked to Basil on the phone and listened to him snort through the phone. He knew it was me because he got excited and kept looking around. Basil even came to pick me up from the airport.

In case you were wondering, I was in Vegas doing this!

Photographs by Mariko Bender. See more at Mariko's website or blog.
Posted by Anita at 5:30 PM No comments:

Help us meet our goal and frenchies in need!

Adopt a Frenchie at